Posted on December 8, 2011 by adamaecompton 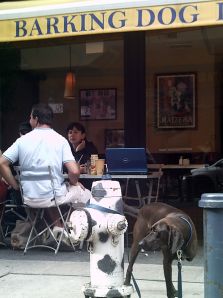 Best dinner bell ever is right here in NYC... I love this place!

Symbolic interactionism was described beginning in the 60’s and 70’s by the likes of George Herbert Mead, Max Weber, and Herbert Blumer. Basically, it boils down to this: Humans don’t make meaning out of life like us dogs do.  Dogs, if you remember from my friend Pavolv, are very much so a product of stimulus and response. All dogs drool at the dinner bell. Humans? Not so much.

I mean, some humans probably drool, but the point is that a human reaction isn’t just reaction. All human action is mediated by human interpretation of what’s going on at the time– and this interpretation is informed by what’s gone on in the past. The meaning that humans make is based on their prior social engagements, and so their behavior is a product of interactions with society.

If symbolic interactionism worked for dogs, then I would be drooling every time this guy crows.

That’s the interaction part. The “symbolism” part is all about interpretation: think about the internal running dialogue that every human has. Dogs drool when the dinner bell rings, but humans have this internal dialogue preventing drooling. That running internal dialogue is a reflection of all the social interactions a human has ever had. The human will think about what the symbol of the dinner bell means. Their memories–the prior social interactions that have built up over the course of their lives– will inform what the human does about the dinner bell. Us dogs don’t do that. It’s just a physical reaction with us.

So… what’s symbolic interactionist about The Occupy Movement?

Consider a different type of bell: When the trading bell rings, humans ascribe meaning to it. Does the trading bell represent exploitation? Does it represent health and vitality and national security? Each human’s experiences, and the meanings that have been embraced by them before, will inform what the human thinks of the trading bell– What meaning is ascribed to it.

Let’s look at three symbols that are blatantly addressed in/by the Occupiers:

The basic question every Occupy Wall Streeter is asking themselves is, “How can get my actions to have the most meaning?” Occupiers want to be an influence. Social interactionism has helped tremendously by opening-up the sphere of influence beyond a handful of leaders. Indeed, the “leaderlessness” is a recapitulation of “true democracy” in which everyone is a leader. The symbol of “a leader” (i.e., a president, a dictator, a czar) is rejected and replaced by style of self-government that, at its core, immediately demands the humans to reinterpret the symbol of “leader” in relationship to how humans govern themselves.

He is defining the label for himself and for his detractors.

One of the most important things that Occupiers have done is to set their own definitions– they have made their own labels, rather than allowing others to label them. In this way, they have created a subgroup that supports its own social interactions. They have also identified themselves to their detractors– rather than allowing their detractors to exercise any power to label them. Labeling is infinitely important to a symbolic interactionist framework for looking at The Occupy Movement because labeling is the mechanism for interpretation.

Because symbolic interactionism says that human behavior is based on meanings that are socially constructed, it is important for any “movement” to exercise power to name its own labels. It must lay aside prior labels to make room for new interpretations that will unite rather than divide the growing human pack.

Who is the criminal here? (Photo: Robert Stolarick, NYTimes)

It’s important to note that labels are socially constructed. Consider the label “criminal” for example, and notice immediately how the whole world watched the definition of “criminal” be called into question time and time again by the actions of police toward the Occupiers. In addition to the label “leaderless” as described above, the Occupiers have also labeled themselves as “peaceful” and “nonviolent.”

Most importantly, though, they have labeled themselves as the 99%. Poetically, no matter what human sees this label, their interpretation is almost always going to be sympathetic with the label because– let’s face it– there just aren’t that many humans in the 1%. Those humans who would like to be in the 1% (and also many who have claimed that label in the rather lackluster “We are the 1%” countermovement) are not actually in the 1%– and, thus, those people ironically serve to reinforce the 99% label. Brilliant.

The first time my master heard the people’s mic was months before the Occupy Wall Street Movement kicked-off this past September. He heard it earlier this summer, at the Tar Sands Action protest in front of The White House, when a lady who was arrested looked toward The White House and shouted her name. Two or three people next to her quietly repeated her name.

The Nebraskan who used the people's mic at the Tar Sands Protest. (Photo by Josh Lopez, joshlopezphoto.com)

I asked my master if this is like when my cousin starts barking and so I start barking, too. He said no. He said that when I do that, I’m just reacting to her– or I’m seeing the same bunny she is seeing. What’s happening with the people’s mic is not a Pavlovian, drone-like, or cultish repetition… although, at least us dogs do think it sounds a bit funky sometimes.

The people's mic in action in Zucotti Park, back in October. (Photo by Zack Stieber, The Epoch Times)

Really, tho, it’s beautiful. It’s symbolic interactionism at its height. It’s a purposeful acknowledgement that one human is speaking in relationship to a group of  humans. The group is openly acknowledging the voice, giving consent to symbolic interactionism, really, as the humans are basically saying, “We recognize that our lives are going to be impacted by your words. We honor your words enough to repeat them so that all humans can hear them. We will interpret your words individually and corporately, and give you the respect to be heard so that you can have agency in our behavior.”

The Occupiers are consciously acknowledging that the meaning that they personally make out of life is being impacted by the words they hear from those around them everyday– and what each individual thinks of those words personally and corporately.

But that is life, says the symbolic interactionist. You’ll never be able to get away from the fact that meaning and behavior are related and socially constructed through the interpretations you have about the interactions you have with other humans.

What others think does indeed matter.

It’s much riskier to ignore this fact of life.