Posted on September 4, 2011 by adamaecompton 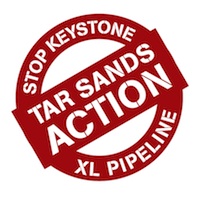 My master was arrested earlier today… and then he sent me an email to pass along to all the humans out there who read this blog. Here’s his message: WHEN I SAY “TAR SANDS,” YOU SAY, “NO!”

You see, today marked the final day of the Tar Sands Action Protest. For the past TWO WEEKS, over 1,252 humans have stood/sat in front of The White House in Washington, D.C., for one unified purpose: To let President Obama know that his supporters ARE NOT forgetful.

…and that it’s now time for Obama to live up to his own rhetoric.

With a platform ostensibly based on change, promise, and hope, Obama ran on a campaign that rang true with many. Now, humans are learning that change and hope are much more subjective promises than they ever thought… and so, now they are using their voices to express the appropriate subjectivity.

It’s in our voices, my human friends, that we have the ability to exercise our power. So… what are you saying? And, Who is listening?

Please, Obama, listen to these humans who voted for you. The small portion of them who were willing to be arrested simply to send you a message are by no means finished. This is just the beginning, and these humans mean business. (Have you met my master?!)

You become more sensitive to others who are in the same kennel but a different location. Your ears begin to perk up when you hear phrases like “corporate personhood” and “solidarity” and “Obama” because those words all mean something new.

Learn more about the Tar Sands by clicking here to read my blog from a few days ago.

Go to the Tar Sands Action page to learn more about the protest action.

This will not be the last time you hear about Tar Sands Action, I promise.