Doesn’t it seem like PetSafe would offer me a contract given all the free publicity I provide? (Yes, my master DID try it on himself first. And, no, I basically never get shocked– but I do sometimes get “beeped” when I’m too far away.)

I haven’t been allowed to blog for awhile, so inquiries have been stacking up in my inbox. Today, though, I was able to convince my master that it’s time for me to adress your questions. He agreed, and gave me the entire morning online by myself. So, without delay, here you go:

Question #1: Where have you been, Ada? I haven’t seen a blog in awhile!
After our trip to the Gulf Coast, I’ve been sticking around our new house most of the time while my master has been working his faculty job and finishing up his research proposal for his PhD. You haven’t seen a blog lately because my master thinks this computer is his. It’s useless correcting him. I’m lucky if I can sneak a minute to update my status on Facebook! He takes the computer with him nearly everywhere he goes, and it just isn’t fair. Somepawdy better call PETA for me and report him!

Question #2: I heard you are in Emmy Award-winning and Oscar-nominated Josh Fox’s new movie Gasland Part II. Is that true?
There are a lot of dogs in Fox’s new movie. It’s a classic case of the Fox and the hounds. Am I one of them? Well, you’ll have to check out HBO on July 8th to find out.

Four legs are overrated. Trust me.

Question #3: Where is your other leg?
Honestly, I have no clue. I guess the vet probably has to dispose of amputated limbs properly, but I don’t know where they wind up when it’s all said and done. The short version of how I lost my leg, as told by the vet clinic, is that a gas field worker brought me up to PA from Texas and then abandoned me. I can be a bit oblivious to traffic, so I was eventually hit in the road. Someone who knew the human that abandoned me brought me to the vet and left me there, after which I was adopted by my master. (You can read more on my “about me” page, here.)

Question #4. Is your master still not talking? Not even to you? How’s that working out?
True that. He’s still not speaking, and it’s working out just fine. I have been learning all sorts of sign language commands, and he’s invented a series of whistles for me– including a special one that lets me know there’s a bunny worth chasing nearby! He still doesn’t have a plan for speaking again, but he assures me that this isn’t going to last forever.

Chickies make both me and my master happy… although I’m only happy about them because they spill so much food. (And, yes, I am very gentle with them!)

Question #5. What happens if your master gets pulled over? Or stubs his toe? He still doesn’t speak?!
Nope! And, quite frankly, it’s rather funny. Cops don’t really know how to treat him, but they do seem a lot nicer. As far as stubbing his toe or spilling his coffee goes, he won’t yell or swear–but, every once in awhile, he will make a noise that sounds like “oops” or “drr” to indicate an accident or an “I shouldn’t have done that” sentiment. He will also make little cheep-cheep noises and bawwwk-bawk-bawk-bawk sounds when he “talks” to the new chickies that we finally got this spring to replace the ones we needed to give away when we moved. 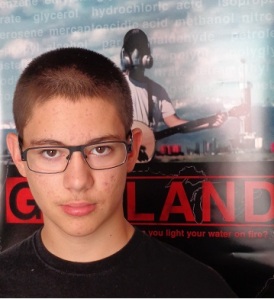 Question #6: Who is inspiring you these days to keep fighting the good fight?
Without question, it’s Johnny Fenton. Although I have a lot of humans I look up to, it’s the youngest cadre that inspire me the most. Johnny recently won the state of Wyoming’s “Focus on the Future” Film Festival Award– and his work is at once both simple and provoking. Johnny is quiet and bright, and in three short minutes he highlights an important truth that affects all life on the planet.

Johnny is a “thinker,” and it shows. He will be in the 9th grade this fall, and I am excited to see how his work develops throughout high school. Watch his award-winning film below– and tell me if you have an answer for the question he poses.

just a three-legged rescue dog, bloggin about critical citizenship, the environment, and all sorts of literacy.
View all posts by adamaecompton →
Gallery | This entry was posted in Popular Stuff and tagged dog with a blog, focus on the future, gasland, three legged dog. Bookmark the permalink.

2 Responses to Questions, Answers, and Inspiration