how to build an outhouse, doggy style

Yesterday, my master spent most of the day building an outhouse at his cabin. I tried to tell him, “Hey, you’re already outside, so you don’t need to go back inside!” But, he wouldn’t listen…

First, he had to dig a hole in the proper location. He went uphill (and upwind) from the cabin about 20 yards. Why on earth he had someone other than me help with the digging is something I will never understand. I dig holes like no other dog out there! He ended up with a 4’x6′ hole about 5′ deep, and he filled the bottom foot in with loose rocks. Then, he stradled two timbers across the hole and put a platform on them that he had made out of a 4’x4′ piece of thick, treated plywood. He leveled it up and took a picture.

Second, he took a 4’x6.5′ panel that he had made and installed it as the back wall. It’s just made from 8′ treated 2x4s framed-up and sheeted with a piece of treated chipboard. He only used one stud in the middle, and he made sure to extend the sheeting the width of a 2×4 beyond the bottom of the frame. This is so the sheeting comes down all the way around the outhouse. He did that for each frame. 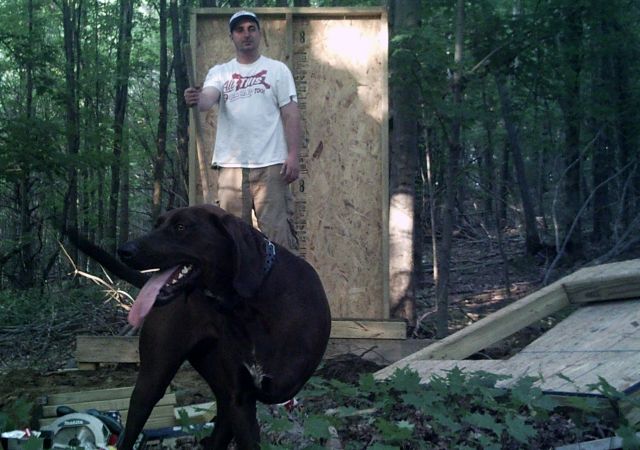 Third, he had made a panel for the left side, also out of treated 2x4s. The panel is 6.5′ tall in the back and 8′ tall in the front, so the top part of the frame is at an angle. The other thing different about this frame is that it is the width of two 2x4s less than 4′. That’s because this panel will sit inbetween the back and the front panels. He installed this panel and loosely screwed it to the back panel (for now).

Fourth, he made a panel for the right side, just like for the left side, but with the pattern reversed. He installed this the same way, loosely screwing it to the back panel. At every step, I inspect his work. So far, so good… 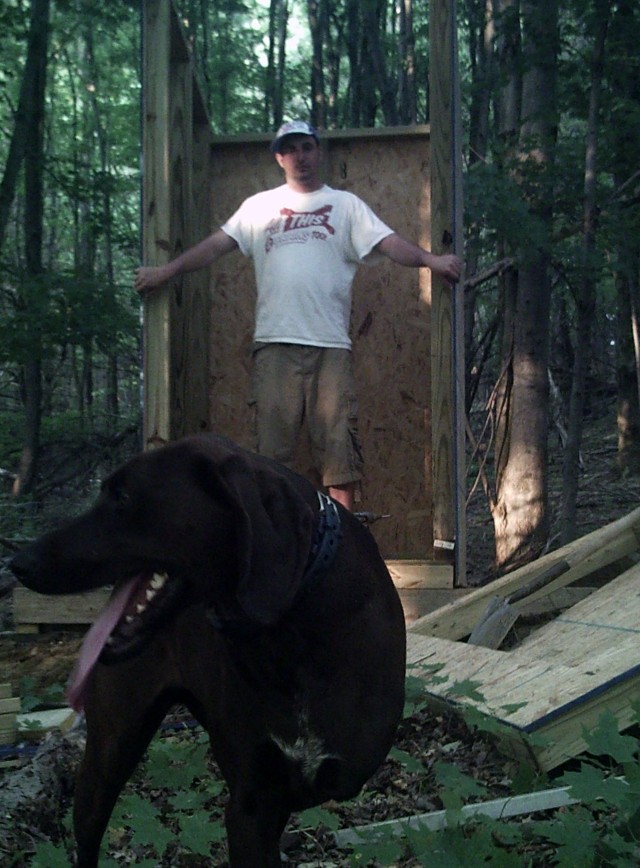 Step 4: Install the right side; pose for picture.

Fifth, he made the front panel. This one was a little tricky. It is just a 4’x8′ frame, but he had to use two 2x4s for studs– one on each side of the hole he cut for the door. Also, he made a crossbeam for the top of the door and the bottom of the door. After he sheeted it, he slid it into place and then screwed the whole thing together tightly.

The last step was to install the roof, which was just a 4’x6′ piece of sheeting. Later on, he will side the outhouse with old barnboard, build a door (of course, silly humans need their privacy in the privy), and fill in the hole with rock.

In case you’re wondering, there’s a 55-gallon drum in the hole so that the poo has a place to collect. Ewwwww. Dog know you should spread this stuff around rather than leaving it in one place, but I’ve decided lately that there are some lessons humans might just never learn from us dogs…

just a three-legged rescue dog, bloggin about critical citizenship, the environment, and all sorts of literacy.
View all posts by adamaecompton →
This entry was posted in Uncategorized. Bookmark the permalink.

1 Response to how to build an outhouse, doggy style