Billboard Humor, Reality… or, “Hey, another post about the home of the Little League World Series!”

Posted on February 6, 2012 by adamaecompton

Today, my master went to the big city of Williamsport, PA. When he got back, he told me about a billboard that he saw. Referring to when T. Boone Pickens came to town, the billboard reads, “T. BOONE PICKENS IS RIGHT…” It also states “REDUCE OUR DEPENDENCY ON FOREIGN OIL — NATURAL GAS FOR VEHICLES.”

The sign’s largest font reads, “It’s time for congress (sic) to pass gas.” Additionally, this message is brought to you by the Genetti Hotel, and the billboard is only one of many in central PA brought to you by Gus Genetti, “Army Member,” according to the pickensplan.com website. Lawd only knows if/why Gus told Pickens that he is an army member?!

What I find interesting is that I found out about Gus’s patriotism because I read the pickensplan.com website, which also blogged about the billboard– I WONDER why they point to this? No, actually, I don’t wonder.

Yup, that's my flag. I just don't know what it stands for anymore!

In fact, T. Boone Pickens is famous for the most emotional marketing ploy for natural gas that there is–  human patriotism. Pickens knows that your culture adores the US flag, and he uses it to his advantage. He knows that the kids who die in war are from areas like ours. He’s counting on your tears to earn a buck. That’s why he came to the big city of Williamsport. Am I wrong?

Then why point out “Army Member”? Why the insistence on some sort of veracity behind the slogan “Drill a well, bring a soldier home”?

Go here to see the pickensplan.com blog. The blog post cordially thanks Gus Genetti for his support. Gus, mind you, owns establishments that have seen great financial benefit from the gas industry– as have many of us here in rural PA. Why doesn’t it say THAT on the blog? It’s equally as true a statement, and equally as non-convincing a reason for why we should allow rampant unproven technology to shatter a delicate and brittle geology beneath PA that no human precisely understands.

It all comes down to money!

It’s a fact, plain and simply put, that Marcellus exploration brings money to our area. The critical mind wants to know what you get for your money, though– right? This is the question unasked by too many humans in the 34-and-no doubt-counting states in which we find the experimental and unconventional shale gas development known as fracking that has only recently evolved to the point of commercial production. It is not your granddaddy’s gas well.

And it is not guaranteed. Just like the timber industry that removed nearly every tree in PA and polluted our streams from tannery runoff– and just like the coal mining industry which also polluted our streams and has caused damage still not repaired to this very day– the shale gas development in Pennsylvania is lucrative. People will make money. Other people will pay. In the end, everyone pays. It’s been that way twice, and technology has only evolved to the point where humans can make it worse, faster, and more irreparably.

We don't even know what we're missing. This photo is from Williamsport in the turn of the previous century. Williamsport's baseball team is named "Crosscutters" for the type of saw used to fell the trees. All the trees.

The question is not whether or not T. Boone Pickens is “right” about money. He’s going to make a boatload, for sure. He’s obviously already figured out how to do that. But you humans are being hoodwinked if you think you are going to start driving natural gas vehicles everywhere. For starters– uhm, are YOU going to buy a natural gas vehicle? If so, then why haven’t you done so already? How is this going to get anyone “off” of oil? It’s kind of like how back in the turn of the last century, everyone else’s trees were getting cut down… not yours.

The world in which everyone else drives a natural gas vehicle is a funny, funny world, and the thought of it gave my master a good laugh while driving down the road. I think he was supposed to laugh at the “joke” about “passing gas”– but he told me that he couldn’t figure out why Genetti wanted to allude to Congress farting.

Or did the billboard mean that it’s a good idea for all the humans to get together and fart to power their vehicles? Like some sort of fart-fuel? This is as confusing as T. Boone Pickens’ inadvertent twist on the meanings of conversation–>criminal conversation–> adultery.

The arguments for the gas industry just get weirder and weirder every day. Lately pro-gas industry marketing ploys have been pulling at more and more emotional heartstrings while at the same time chastising any viewpoint of fracking that is critical as emotional hype. 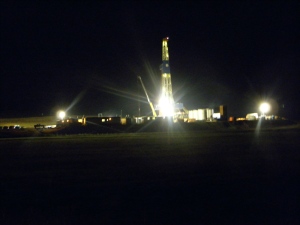 Before fracking, corporations must site the wellpad, excavate, drill verticals, drill horizontals, cement the casings, then perforate, then frack. Gas like this is used for tar sands development, in Canada, creating even more pollution. They also sell the gas to China. THEN, you will have to buy it back. Woof!(photo: adamaecompton)

If the industry is to ever succeed, then they need to look at themselves more realistically and stop making so many claims likening natural gas as a panacea that will fix virtually every problem in America… nay, the world! This stuff’s going to put an end to war and bring our soldiers home, for Pete’s sake!

Unless, that is, Pickens sells it to China. Which he will. That was in the works well over two years ago, humans. Really, the sad part is that you are being duped. Click on my “HydroFracking” category to the right to read more…